This book journey is unlike any other journey I’ve been on so far. There are many steps that must be walked out before I “get to where I want to be.” I’ve never done it before. There is no one holding my hand. There is no printable schedule. Every day I feel like I’m walking in unmarked territory, and there are times I long for something familiar, something that is worn and I can slip in to (like being a student or working an office job). I long for a stamped pass that says I’ve made it.

I have in my mind if this one person would read my proposal, if this one blog would promote mine, if THIS ONE THING WOULD HAPPEN, UNICORNS WOULD APPEAR IN MY BACKYARD. After all, that’s what happened for so-and-so.

Or so it would appear.

Hello, Samantha. Come back to reality.

So often we want the journey to success to be one step onto the right launching pad, and BOOM, you’re there. This mentality reminds me of a power-up in a video game. By maneuvering your character on a glowing stone or box, it suddenly launches you across the canyon, the roadway or the chasm. And boom, you’re there.

Again, that only happens in video games.

Getting to where we want to be in life (or more precisely, where GOD wants us to be) is more like laying one stepping stone in front of us at at time, trusting God with each step, putting in the work one rock at a time. And because these are little steps, we often don’t see them in other peoples’ lives, and it’s easy to fall into the comparison trap. We compare their performance, their victory moment to our daily workout, our daily grind.

Everyone’s “daily workout” is different. For moms, that may be repeating yourself for the millionth time to your kids in order to train them for the future. For students, it’s being diligent in your work. For others, it’s running those reports, dealing with repeated workplace conflict, and going long stretches without being recognized.

For me, it means emailing lots of publishers or reviewers, and maybe getting one response. It means working on lots of posts that people may never see. It means being faithful in the small things. It means a lot of waiting. But it all has value. It’s all laying the groundwork for the next step.

Whatever line of work you’re in, embrace the stepping stones, embrace the daily workout and quit obsessing over that one launch pad that probably does not exist. Also, remember that there is probably someone out there who wishes they could have YOUR job.

How’s that for perspective? 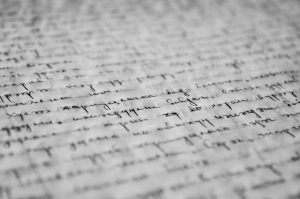